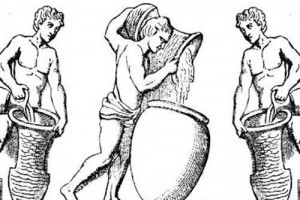 The Romans introduced vine in the Armagnac country. Arabs imported the still and the barrel is of Celtic origin. The Armagnac brandy appears on the Saint-Sever market in the early XIVth century. As “aygardent”, literally “burning water”, it is mainly used as a medicine and is believed to have therapeutic properties.

In the XVIIth century, Dutch import it in large quantities and use it to enhance and stabilize wines they sell in Europe. During Napoleon’s blockade, Armagnac remains for a long period in barrels and turns dark. Therefore, it becomes a quality product with the taste and curves that make its success.

Since ancient times, Armagnac has had a reputation of a medicinal drink with multiple virtues and treatments, the writings of “De Maître Vital Dufour” attested:  this water, if taken medically and soberly… it has 40 virtues or efficiencies. It sharpens the mind if taken in moderation, recalls the past to memory, renders men joyous above all, preserves youth and delays senility …».

Today, science has taken over this study and some researchers have been able to prove that in moderation, Armagnac wood tannins participants have a protective role in terms of aggregation of blood platelets.

To visit this site you must have the legal age set by the law of your country about the consumption of alcohol.